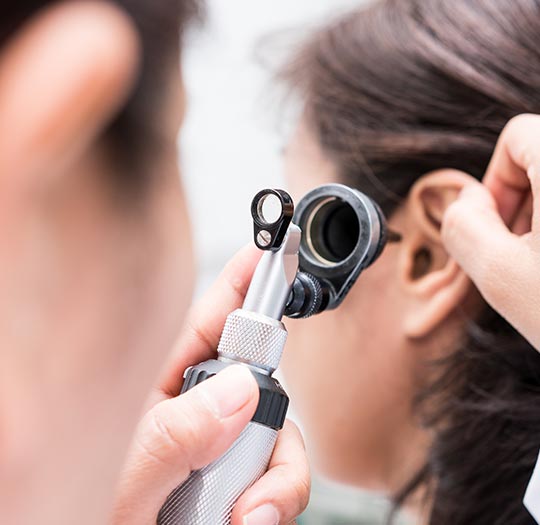 Otoacoustic emissions or OAE testing is a method of measuring how well your inner ear is working.

Your ear has three parts, your outer ear, your middle ear, and your inner ear, also known as your cochlea.

Your inner ear gives off sounds of its own when it responds to a sound coming into your ear from outside your body.

These sounds are known as otoacoustic emissions, or OAEs. They are very quiet sounds that echo back into your middle ear. OAE testing measures the intensity or absence of these sounds.

People who have normal hearing produce OAEs. If your hearing loss is greater than about 25 decibels, your inner ear will not produce these sounds.

If sounds do not reach your inner ear, they will not be reflected back to your middle ear.

How Your Audiologist Performs OAE Testing?

You don’t have to do anything to have OAE testing. Your audiologist places a small probe in your ear. The probe sends sound into your ear and measures what comes back.

Your audiologist sees the results on a monitor.

Because OAE testing doesn’t require any kind of participation from the person being tested, it can be done on newborns, unconscious people, sleeping people, people in comas, and people who deal with developmental challenges.

It can also reveal hysterical or feigned hearing loss.

What Does OAE Testing Measure?

They can also use OAE testing to determine how much hearing loss is due to mechanical problems in the ear and how much has a neurological component.

OAE testing has been around for about 40 years. In the early days of audiology, hearing specialists theorized that the hairs inside the cochlea (the inner ear) that vibrate with sound might make sounds of their own.

It wasn’t until the late 1970s that scientists actually measured these sounds when engineers had solved the problem of how to detect these faint sounds made by the ear itself even with noise from other sources outside the ear.

Audiologists use OAE testing to measure four kinds of OAEs:

Pure-tone audiometry, your response to a tone you hear (or don’t hear) through headphones measures your hearing as a whole. It measures how well your outer ear, middle ear, inner ear (cochlea), cranial nerve VII, and auditory brainstem work together to give you the perception of sound.

OAE testing narrows down problems to just the peripheral auditory system, your outer ear, middle ear, and cochlea (inner ear). By itself, it can’t pin down the cause of noncochlear hearing loss.

What Does Your Audiologist Need to Get Useful Results from OAE Testing?

Additionally, your audiologist may not be able to perform OAE testing if:

How Your Audiologist Interprets the Results of OAE Testing?

Spontaneous OAEs usually generate a sound with a frequency of 1000 to 1500 Hz (cycles per second). That’s about the same pitch as a short letter o, as in hot. But because a spontaneous OAE happens so quickly and so often, you don’t notice it.

Spontaneous OAEs usually occur in one ear, not in both ears. They are more common in women than in men. Occasionally spontaneous OAEs are so loud that other people can hear them.

OAE testing won’t find neurological problems that affect your hearing, but it can be very useful in pinpointing other causes of hearing loss and how hearing aids can compensate for it.

Harbor Audiology is experienced in filing for VA benefits, and we work with all major insurance plans. We are open most evenings and Saturdays. Harbor Audiology has offices in Tacoma, Gig Harbor, Silverdale,  Sequim, Port Angeles, and Bainbridge Island.  Request your appointment online today!