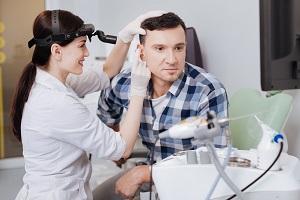 Early stage hearing loss might not seem like a big deal. You might not even recognize that you’re having difficulty hearing until the condition progresses. But, according to a new study by the National Council on Aging (NCOA), untreated hearing loss can have serious social and emotional consequences – especially for aging adults.

The NCOA surveyed 2,500 hearing impaired adults age 50+, and the results are shocking – those with untreated hearing loss are more likely to report anxiety, paranoia and depression. They were also less likely to engage in social activities than hearing aid wearers.

The families of hearing aid wearers weighed in on the survey, too. In nearly every dimension measured, the families not only noted improvements, they were more likely to identify and report positive changes.

Prevalence of Hearing Loss Among Seniors

Hearing loss affects more than 19 million Americans aged 45 and older, making it one of the most widespread chronic conditions in the U.S. It can impact a person’s entire life, from the office to the bedroom, yet only 40% of hearing impaired seniors wear hearing devices.

Why? Sixty-percent feel their hearing isn’t that bad and/or believe they can get along without them. Over half said hearing aids would make them feel old or they’d feel too embarrassed to wear them.

The good news is that today’s hearing aids comes in a variety of sizes and styles, some of which are completely invisible! Harbor Audiology provides expert hearing health care and consultation to people of all ages in the Gig Harbor and Tacoma, Washington areas.

Together, we can fight the stigma of hearing loss and turn up the volume on your life! Contact us to learn more or to schedule an appointment.